Our family history in the art of Blue Pottery dates back to my forefathers of the Sawai Ram Singh era in Eighteenth century. Only one or two generations in between were involved in Temple & house building or in painting. In 1965, my father Sh. Bhag Chand Ji Kumawat took interest and joined Sawai Ram Singh Shilp Kala Mandir, In 1969, he had set up the manufacturing at Sanganer. It is naturally adapted to by all family members who participate in every stage of the making process including design sketching and selling.

New items of utility have been added and more items join the product range on demand basis. Beads of various sixes, decorative bathroom tiles in different sixes, door knobs and ash trays in innovative styles, soap dish are items that are used everyday. These items were not made earlier. Other decorative items include flower vase and birds & animals in various sizes.

Last one hundred years, blue pottery is being made in the Pink City of Jaipur, for household use and as a decoration items.
Blue color is pleasing to the eyes. As part of Indian mythology, it is associated with Lord Krishna. Blue color has various shades from light turquoise to dark. Other colors like green, brown, yellow, pink and black are also used to give variety and beauty to an object. But the domination of blue can be compared to blue color of the sky, which is a nature’s gift to mankind.

Blue Pottery is also one such art form which has grown vastly in the last two centuries when it had moved from Persia. It has gained popularity for itself and also brought international recognition for jaipur. Blue Pottery may not have evolved in Jaipur, but its close association is there with the Pink City.

Art as an activity grows in the right social condition only. It blooms in the right environment and takes a new outlook when it moves from one culture to another. Blue Pottery is also one such art form which has grown vastly in the last two centuries when it had moved from Persia. It has gained popularity for itself and also brought international recognition for jaipur. Blue Pottery may not have evolved in Jaipur, but its close association is there with the Pink City. Blue Pottery of Jaipur is made from a stone which is found in abundance in Rajasthan. 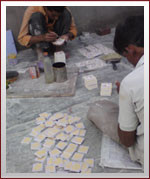 The stone is crushed and Iron filtered and is popularly known as Quartz. Good quality qrartz is found in Ajmer, Beawar, Udaipur and Neem ka Thana.

History of blue pottery is not very old, however, blue glaze has a long history as it has been excavated from Harappan and Mohanjodaro sites. Origination can be traced back to Persia where Shah Tamas and Abbas wanted to export it to Europe to earn money for the kingdom. They had brought some skilled Chinese potters but the clay being different used top change its color when heated.

In India, Blue pottery was started in Mugal era when an Iranian Potter came and settled in Dilhi. Mr,. Bhola Ram Kumar, popularly known as Kumawat was the first person to learn this art. In Jaipur, Raja Sawai Ram Singh Ji was the ruler then. He had a keen interest in handicrafts and had tried experiments. Once during Sankranti, two Kumawat potters came for kite flying. They had used a thin layer of glass on their thread to make it strong for cutting other’s kites. Ram Singh Ji won the competition and called the two artisans to his palace. They were duly rewarded and sent to Delhi for learning more on making of pottery. They later joined the Maharaja Art School.

n 1963, Maharani Gayatari Devi had started the Sawai Ram Singh Art Center, which was funded by all india Handicrafts Board And Maharani Gayatri Devi. The center used to pay a stipend of Rs. 100 per person for learning the art of making blue pottery. Today, the art has spread to a lot of families.

The richness in colors and its use as an excellent decoration item is adding to its popularity. From simple pots in the early days, blue pottery these days is found in various shapes and sizes (which includes many day-to-day utility items e.g. Ash Tray, Soap dish, Door knobs, etc.)

No products in the cart.